This cover story was originally published in Page Six magazine. You can see the original version (including stunning shots of the actress in glitterati gowns) at the source: Full of Grace: Maria Bello 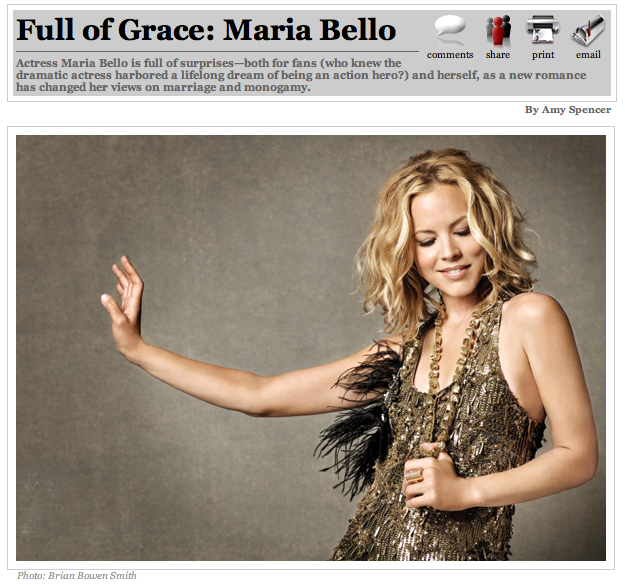 Actress Maria Bello is full of surprises—both for fans (who knew the dramatic actress harbored a lifelong dream of being an action hero?) and herself, as a new romance has changed her views on marriage and monogamy.

Maria Bello has never shied away from controversy—after all, this is a woman who’s starred in such button-pushing films as A History of Violence, Thank You for Smoking and the upcoming Towelhead. But there’s one potential eyebrow-raiser in her new movie The Mummy: Tomb of the Dragon Emperor that the actress didn’t see coming: her age. Specifically, that she is playing the mother of a 20-year-old. Maria rolls her eyes and throws her arms up. “I’m 41. Of course I could be the mother of a 20-year-old!” she says. “I’m not afraid to play my age. I never was. I’ve never been an ingénue. I like getting older.”

In real life—that is, here in the front yard of her two-story Craftsman home on the west side of Los Angeles—Maria is mom to a 7-year-old. And let’s face it: This is a woman who looks damn fine for 41. She’s wearing a white button-down shirt and jeans, with barely a hint of makeup, and her hair is pulled back in a sloppy-sexy ponytail. Her skin is positively glowing as she enjoys a snack of chips and salsa.

“We eat dinner out here all the time,” the actress says, pointing to the deck her younger brother built. “And we have dinner parties once a week.” The “we” she’s referring to? Herself and her two favorite guys. The first is her son, Jackson Blue, whom she had with her ex-boyfriend, screenwriter Dan McDermott (the pair split four years ago). Her son is named for her college mentor (Augustinian priest and professor Ray Jackson, who passed away 11 years ago) and, simply, for the color blue. “Twenty years ago, my friend, who is a Celtic healer, said, ‘I feel this blue energy around you,’ ” explains Maria. “So when I was pregnant, we thought, ‘blue.’ ”

Jackson is at basketball camp today, but home photos of him show a grinning kid with shaggy blond surfer hair. And, in fact, Maria and her boy have been taking surfing lessons together. But “his real bug is basketball,” she says. “My child is obsessed. One of his first words, after ‘Mama,’ ‘Dada’ and ‘dog,’ was ‘basketball.’ ”

The other man in her life is Bryn Mooser, her boyfriend of a year-and-a-half. “He’s beautiful inside and out—a great human being,” she says of Bryn, who is a musician, artist and part-time waiter. “He has more character in his little finger than any man I’ve ever met.” They met at the restaurant he worked at near her home. “We had been looking at each other,” she says. Then last March, at a meal for her cousin’s birthday, Maria made a move. “I had a couple of drinks, so I felt brave. I walked up and said, ‘Can you take this cake and put a candle in it? And by the way, do you have a girlfriend?’ From that night on, we’ve been together.”

Her relationship with Bryn, 28, is going so well, he’s changed her view on marriage. “I was always anti-marriage,” she admits. “I didn’t understand monogamy. I couldn’t figure out how that could last. And then I met Bryn and I started to understand the beauty of constancy and history and change and going on the roller coaster with someone—of having a partner in life.”

Maria was born in Norristown, Pa., a suburb 25 minutes outside of Philadelphia, into a blue-collar family of four kids. Dad was a construction worker, Mom was a nurse. While at Villanova University, Maria studied law—peace and justice education, with a focus on human rights work. On a whim, she took her first acting class during her senior year. Her debut monologue was, she says laughing, a Bob Dylan song, which she recited dressed as a homeless person. Still, right away “I knew that’s what I should be doing.” She felt guilty about switching from law to acting, but her aforementioned mentor changed her mind: “I said, ‘I feel like I’m supposed to be an actor, but I also feel like it’s a selfish profession, considering what I was going to do.’ And he told me, ‘You serve best by doing the thing that you love most.’ ” That friend, by the way, was in his sixties, a fact Maria takes pride in. “My friends in college were Ray Jackson, who was 65, and my grandmother, who worked in the cafeteria!”

And if those seem like curious couplings, she’s got another: “My best guy friend is turning 78 next week,” she says, referring to John, a man who saw Maria in a movie years ago, felt they had a connection and asked to have a meeting with her. Intrigued, Maria met him at a Mexican restaurant. “We didn’t leave for five hours. Since then, we’ve probably talked every day.” How does she explain her friendships with senior citizens? “I’m interested in people who have lived, who are searching and questioning. I have more in common with John than probably any friend I’ve ever met.” For example? “We read the same books—we’re self-help and philosophy junkies.”

Maria does have at least one Holly wood friend her own age: 40-year-old actress Carrie-Anne Moss, whom she met in a hotel lobby in Toronto 12 years ago. “I walked in and she goes, ‘I love you!’ And I go, ‘I love you, too!’ ” We went up to her hotel room and made French onion dip in a wine glass and had chips and salsa and talked all night.” The actresses—who Maria says “never talk about the business”—are godparents to each other’s children. (Carrie has two sons.) “She is so compassionate,” says Maria. “She is my parenting mentor.”

Maria got her first break on the 1996 CBS spy show Mr. & Mrs. Smith (not to be confused with the Brangelina movie of the same name), then moved on to ER for two seasons alongside George Clooney (“he’s a really, really good person”) and Mariska Hargitay. ­“[Mariska] introduced me to Dan, so she’s responsible for my child,” Maria says with a smile. But Maria says her true breakthrough was in the 2003 movie The Cooler, opposite William H. Macy, when she was 36. “I did a lot of work before then, but I don’t think it was until The Cooler that I came into myself as an actor, and that other people noticed me as an actor,” she says.

Her latest project is The Mummy: Tomb of the Dragon Emperor. But don’t misunderstand: This big action blockbuster isn’t a sell-out film for Maria, but rather a childhood fantasy come true. “My biggest dream since I was a kid was to be the woman sneaking on the pirate ship dressed like a man, who was this great sword fighter, and the captain fell in love with her,” she says. “When I got into acting, I told my dad my dream was to be Indiana Jones. He said, ‘Honey, you want to be the girl in Indiana Jones?’ And I said, ‘No, I want to be Indiana Jones.’ ”

She laughs out loud at the irony that people think she’s a capital-S serious actress who fell into an action role, when really, it was the opposite. “I don’t know how I became known as a dramatic actress. When people would ask what part I wanted to play next, they expected me to say something like Medea, but I would say, ‘I want to play Indiana Jones!’ And for The Mummy I did these incredible stunts!” she says, and the joy is visible on her face. “This was a thrill of my life.”

And that’s the great thing about Maria Bello—she’s a woman who’s experienced enough to know that the best way to serve the world is by doing the thing she loves most. Even if it is battling the bad guys with a sword.