For my cover story on Rachel this week (featuring the completely necessary cute fashion photos of her) go to:  Rachel Bilson in Page Six Magazine 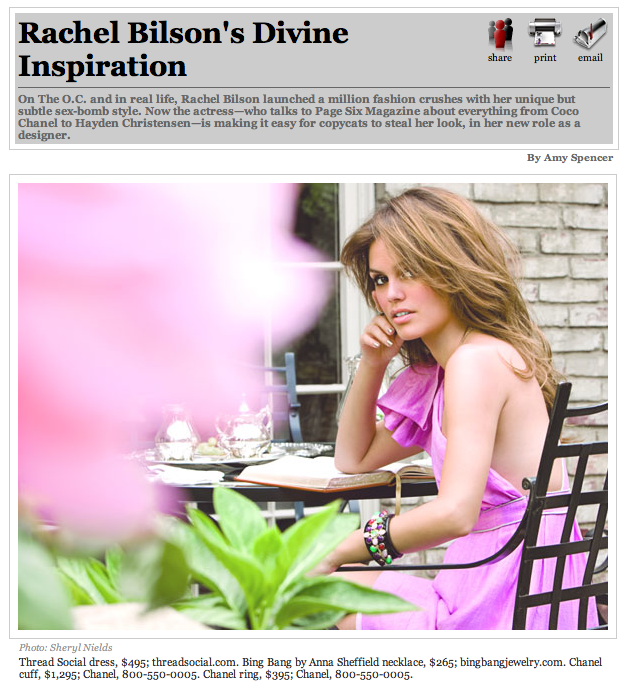 On The O.C. and in real life, Rachel Bilson launched a million fashion crushes with her unique but subtle sex-bomb style. Now the actress—who talks to Page Six Magazine about everything from Coco Chanel to Hayden Christensen—is making it easy for copycats to steal her look, in her new role as a designer.

There’s been a momentary mix-up about meeting for lunch at the Alcove Café & Bakery in Los Angeles’ trendy Los Feliz neighborhood, minutes from Rachel Bilson’s home, one that left the doe-eyed former star of The O.C. standing by the front counter alone, nervously clutching her bag like a girl waiting to be invited to the popular kids’ cafeteria table. It’s a surprising sight, given that Rachel’s O.C. character, Summer Roberts, was the cool girl in school. Rachel sighs with visible relief when this interviewer shows up, and launches right into a giddy monologue.

The actress, who just turned 27, uses the words “cool,” “amazing” and “like” as much as you’d expect the former star of a teen drama might. She also employs terms like “Oh my gosh” and “Ay-yai-yai!” As she sits down, she pulls off her tortoiseshell Ray-Ban Wayfarers and folds them in half, tucking the square into her palm. “Pretty nifty, isn’t it?” she says, giggling like Doris Day. It’s the first sign that this baby-faced actress is actually an old soul: She’s a girl who lives for vintage fashion, loves classic architecture and looks up to icons from the ’60s and ’70s to concoct a personal style she calls “eclectically accessible.”

Her outfit today is, indeed, effortlessly chic: a label-less navy blue trapeze dress, with a scoop neck and spaghetti straps, that she found in a little store in Soho. The tan braided leather bag hanging from the back of her chair is by Zac Posen, a friend. On her feet are a pair of Sigerson Morrison sandals. “I guess they’re gladiator-esque,” she says. (She uses that suffix a few times, too: “esque.”) Her hair is pulled back in a messy bun, with two tiny braids pinned on either side and a few loose strands hanging to her shoulder in a perfect “Oh please, I just threw my hair up” kind of way.

No wonder so many twentysomethings (and more thirtysomethings than may like to admit) have style crushes on Rachel. But tell her this and she responds with a shy bob of her head. “Awww, that’s amazing!” she says. “When I hear stuff like that, I think it’s so cool. If people like what I wear, that’s awesome.” Even DKNY Jeans noticed how much people like her style, and signed the actress up to design a capsule junior sportswear line called Edie Rose that will hit stores this month.

The line is named for her maternal grandmother, Edith, who passed away a few years ago, and her friend’s grandmother Rose, who reminds her of her own. Speaking of Edie, Rachel says, “She would just be so proud and…ack”—she stops for a second to fan her glassy big brown eyes as they well up with tears. For a second, those eyes, mixed with the freckles on her nose, make her look a bit like a Precious Moments figurine. “To have her name live on in a way,” she says, “it just makes it so much more special.”

The collection consists mostly of black and white basics mingled with hits of sunny yellow. And, yes, the vibe is very Rachel: “It’s simple with one pop of color, which is like me. I’ll dress basic with, like, a pop of [color in] a shoe or an interesting bag.” The design work took place a few months ago at the DKNY Jeans offices in New York. “I came with some pictures, a couple pieces of my own clothes and some ideas in my head.” Since Rachel can’t draw, she described her vision for each piece—including small details like buttons—and, over the course of a few hours, the entire line was done. She’s also learning how to sew, in part because so many of the vintage items she picks up require altering to fit her tiny, size 0 frame. And while Rachel may be an ace at describing an outfit, so far she’s terrible at making one: The first item she sewed—a long, flowing skirt—“was a disaster,” she says, laughing. “It was 10 sizes too big and instead of going out it goes in at the bottom. Totally unflattering.

A passion for fashion is in Rachel’s blood, though, and she credits her style to her mother, Janice, a spiritual adviser. “Vintage is her love,” the actress says. “She has a great eye, which I think I’ve inherited from her.” Rachel doesn’t, for example, have a favorite brand of T-shirt, and when she tries to think of one, she decides on an old white cotton tee her mother picked up in India, on an annual visit to see her guru. “She used to go every year, and she’d bring back this amazing jewelry, like bangles, which I still have.”

Rachel was raised in Sherman Oaks, in the North Hollywood area, by her Catholic-raised mother, and her Jewish, television director father. (Her parents are now divorced and she has one older brother, 31.) She is, truly, a Hollywood baby. Her great-grandfather ran the trailer department at RKO pictures. Her great grandmother wrote screenplays (like 1950’s Pal, Canine Detective). Her grandfather directed classic sitcoms, including Hogan’s Heroes and Get Smart. Her aunt is a producer who worked with Errol Morris on Fog of War. And her father, Danny, directed television shows, including Viper and The Sentinel.

Rachel describes a childhood spent visiting film sets with her friends on Friday nights. (Her classmates at Catholic school included Kirsten Dunst and American Idol runner-up Katharine McPhee). As a teen she joined the family business, appearing in commercials, including “a few embarrassing ones, like Pepto-Bismol and Subway, ay-yai-yai.”

Today, Rachel lives in an old 1920s Spanish bungalow, which she shares with her little shaggy gray mutt, Thurmen Murmen. She’s turned an extra bedroom into a walk-in closet filled with a couch, an old vintage trunk that’s been in her family for decades and a standing wood wardrobe she picked up at an antique mall. She says she has kept most of her clothes forever, especially shoes (like a pair she dreamily describes as “vintage tan-brown leather boots with tassles on the side. They’re kind of riding-boots-esque”). She also has a collection of Chanel bags she’ll never get rid of. Her favorite? “A black bag in the quilted pattern, but it’s a bucket. It’s the best purse in the world.” Coco Chanel is on the list of people the actress counts as her fashion icons, especially after she and her mother visited the legendary designer’s apartment in Paris last October during Fashion Week. “She was like the Beatles,” Rachel says. “So ahead of her time.” But her number one fashion icon is Annie Hall, the character and the actress: “I really respect Diane Keaton because she’s always known herself and been true to herself, and she doesn’t care what other people think. I think that’s really cool.”

Perhaps Rachel has developed this casual attitude after being bashed by the fashion police. Recently, for example, she was featured in a perezhilton.com item for wearing baggy jeans, and got flak for a paparazzi shot in which she’s sporting Martin Margiela open-toed ankle boots while feeding a parking meter. “I love those boots!” she says. “I know they have no toes—that’s what’s cool about them. Otherwise, it’d be just another ankle boot.” The concept of judging and being judged riles her up more than anything else. “I think it’s cool to try things, and I think it’s cool to be on the worst-dressed list, I really do! Because you’re like, ‘You know what? I like how I look, it’s different.’ So people aren’t as accepting of it, but that’s OK. Bring it on, I don’t care!”

The fact is, Rachel is too happy to care, thanks in part to her boyfriend of almost a year and a half, actor Hayden Christensen, also 27 and whom she co-starred with in the February ’08 movie Jumper. “I’m happy and that’s all that matters,” she says. “I have someone really great. Someone who can make me laugh—that’s always what comes first. It’s the best to be able to really, like, truly laugh with someone like they’re your best friend, you know?”

Hayden is not the first co-star she’s hooked up with, of course. She famously dated her co-star Adam Brody from The O.C. for three years before splitting up during the show’s final season. In fact, the two haven’t seen each other since the series wrapped in spring of last year. “They say, ‘Don’t date your co-star,’ but that’s who you’re around,” says Rachel. “If you’re in an office, and you see someone every day and you click well, you’ll start dating. It’s the same thing.” The two lived together, and after their breakup in December 2006, they divided belongings and dogs—
Adam took pit bull Penny Lane, and Rachel walked away with Thurmen. “Oh yeah, during the divorce, that was a given.”

Up next for Rachel is New York, I Love You, an abstract film collection of NYC stories due out next February, in which she also co-stars with Hayden. She already visits New York at least six times a year, but making this movie only increased her desire to buy a place—“somewhere downtown”—as soon as possible. “I want an old building,” she says. “I love the true New York old hardwood floors, exposed brick—the whole deal, you know?”

Her favorite Manhattan boutiques are Mayle and Lyell, both in Soho, and the vintage shop Circa Now in the East Village, and she loves dining at downtown fashion-crowd hot spots like Café Habana and La Esquina. Ideally, she says, she’d like to raise kids in New York, but first, she has
weddings on her mind. No, not her own. Thanks to a set-up on her part, The O.C. (and Gossip Girl) creator Josh Schwartz is marrying her friend Jill, with Rachel as the maid of honor. “They’re having a big wedding, which made me realize I want a very small wedding,” she says. “I don’t like attention like that. It freaks me out. I’d almost want to elope. My mom would have a heart attack, but maybe I’d have to bring her.”

Which is not to say she can’t stand on her own. As the date of her Edie Jose for DKNY Jeans fashion debut approaches, she is not bothered by naysayers who groan, Oh God, another actress with a clothing line. “I ignore it,” Rachel says, without missing a beat. “I think of myself as someone who loves fashion and has the opportunity to design clothes, which is something I’ve always wanted to do.” As she stands up, she unfolds her Ray-Bans and slips them back on, looking like the kind of girl who could inspire a million copycats. “I hope to prove them wrong with the product. Hopefully.”