I remember watching an episode of House of Cards in Season Two, when they spoke of a “Deep Web” which most of us don’t know how to access through standard search engines. Well, now I believe the web goes deep. Because yesterday I was searching for something I had written, and I didn’t find that. But I stumbled upon this:

It’s a Q&A I did for a site called rockerchick.com. Apparently I did the interview in June 2001, and I was so honored to be asked to participate because rocker chicks tend to rule. This page isn’t just a throwback in style, it’s also a snapshot of who I was fourteen (fourteen!) years ago.

My favorite television shows at the time of the interview? Real World/Road Rules Challenge and Making the Band.

Sigh. Real “web history” rules. One of the predictions was wrong—how a friend of mine predicted I’d be running my own magazine at some point. But the prediction I made for myself was spot on. As I said back then, “I want to be able to look at a stack of pages and know that the words are all by me and for me. Kind of like the sous chef who opens her own restaurant — I want to be able to say ‘If it was all left up to me, this is what I’m capable of.'” As it turned out, I was able to create a few “stacks of pages” with my books, and having full control over what ended up on those pages has been more satisfying than I ever imagined.

The homepage of this site says it’s for sale, so to make sure this story lives on forever (as it must!) here is my interview. If that link no longer works, here it is printed below in full:

WHAT SHE DOES:
Senior Editor, Features, Glamour magazine 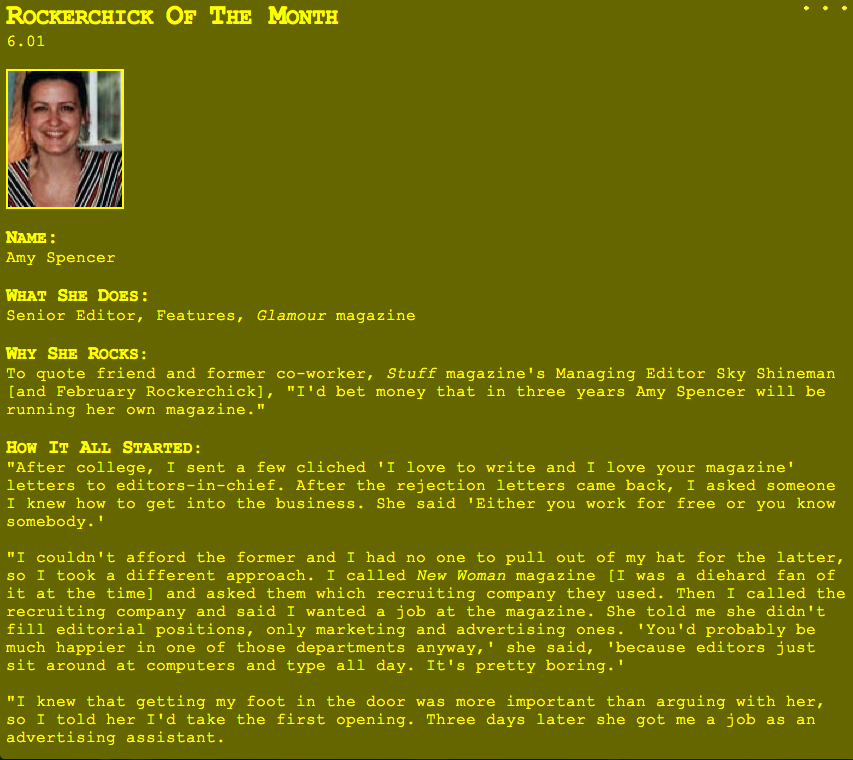 Here’s the original site. Click to see larger…if you dare.

To quote friend and former co-worker, Stuff magazine’s Managing Editor Sky Shineman [and February Rockerchick], “I’d bet money that in three years Amy Spencer will be running her own magazine.”

HOW IT ALL STARTED:
“After college, I sent a few cliched ‘I love to write and I love your magazine’ letters to editors-in-chief. After the rejection letters came back, I asked someone I knew how to get into the business. She said ‘Either you work for free or you know somebody.’

“I couldn’t afford the former and I had no one to pull out of my hat for the latter, so I took a different approach. I called New Woman magazine [I was a diehard fan of it at the time] and asked them which recruiting company they used. Then I called the recruiting company and said I wanted a job at the magazine. She told me she didn’t fill editorial positions, only marketing and advertising ones. ‘You’d probably be much happier in one of those departments anyway,’ she said, ‘because editors just sit around at computers and type all day. It’s pretty boring.’

“I knew that getting my foot in the door was more important than arguing with her, so I told her I’d take the first opening. Three days later she got me a job as an advertising assistant.

“I assisted two salespeople, reserving them restaurant tables, tallying up their taxi receipts and shaking my head at the travesty that Schick razors chose to advertise with Self instead. My boss left after five months and hooked me up with the publisher of a new launch called Maxim magazine, a men’s import from England. They needed their own advertising assistant. I remember worrying that it was bold jump for me to go from a huge women’s magazine title to a no-name men’s magazine. [Four years later,Maxim would sell more copies than GQ, Esquire and Details combined each month; New Woman would fold.]

“During my interview, I told the publisher that I didn’t actually LIKE advertising, that I wanted to be an editor. He was so desperate for help, he said they could work something out. I basically arranged a 75% advertising, 25% writing gig at Maxim. I wrote my first story — on men’s colognes — my first week and by the end of the month was covering the entire men’s grooming market. At breakfast, the president of Calvin Klein cosmetics would be schmoozing me; by lunch I’d be disguising my voice as I took a message from her for my boss.

“At the end of the year I jumped over to the editorial side full time, as assistant to the editor in chief. She quit one week later. The new editor brought in his own assistant, so I was promoted by default.

“I spent the next three years writing and editing everything from how to spin a basketball on your finger to how to diffuse a fight with your girlfriend. Then my friend, an editor at Glamour, called and asked if I would write a feature for her.

“After handing it in, I got a call from the deputy editor saying she liked the story and wanted to meet with me. Apparently my Maxim sense of humor appealed to the editor-in-chief and they offered me a job as a senior editor at Glamour. I’ve spent the last year editing a few dozen ‘How to Make Him Love You in Five Minutes or Less’ features.”

WHY SHE CAN’T STOP:
“Because a few times a week, I write something that makes me laugh out loud as I type it. And I think to myself, “How cool is this that I get to write something that will make my friends laugh, and to know that 2.5 million other women are also going to read it? More than twice I’ve had the straight-out-of-a-movie moment after meeting a stranger when they say, ‘Oh, I just read this thing in Glamour about such and such,’ and I get to say back, ‘Wow, I wrote that!'”

WHEN THE JOB SUCKS:
“First, I’m writing for someone else. And second, when all my energy goes into something that gets tossed around a hair salon for a month, and then into the garbage with the split ends.”

WHEN THE JOB ROCKS:
“Well, I like to write. But more than writing, I like to finish writing. I like to read my final product and think, ‘Damn, girl, that’s good!?’

“And if I didn’t have to write five days a week, I wouldn’t. I’d be watching head-to-head episodes of the Golden Girls.

“So, being forced to produce creatively on a daily basis is the thing I love the most, it’s not only good for my soul, but it also wrings the best out of me. The more often I write, the better my chances of producing something halfway decent. It’s basic math.

“Also, while writing is a squeeze-the-clever-juice-from-your-brain gig, editing adds the project-planning and problem-solving element to the job, which I also get off on. One minute I’m assigning a story about ‘Surprisingly Important Sex Moments’ to a male writer, the next minute I’m calling publicists to arrange an interview with Jaime Pressly and Simon Rex, and the next I’m taking a writer out for sushi to plan her piece on road-testing pick-up tricks.”

WHY GLAMOUR?
“It’s what I do best. Some people like writing investigative pieces, tracking down bouncers who witnessed a fight at the Limelight; I enjoy the creativity at the keyboard, turning those nauseatingly familiar stories on finding true love into something worth reading. I like that I can make references to Magnum PI’s moustache, Capezio shoes, and Ramen noodles because my audience is exactly like me. After dredging up Maxim jokes for men for four years, it’s a welcome break to take the first thing that comes to my mind and slap it into an article.”

WHAT IT MEANS TO BE A SENIOR EDITOR AT GLAMOUR:
“It means that everything that happens to my friends and I in our dating lives is fodder for a story. Every two or three weeks, we have an ideas meeting. All the editors come prepared with ideas, of course, but more often, rather than going over them, my editor turns to each of us and asks, ‘What happened on your last date?’

“During one meeting, I told her about a friend of mine who was mad for a jerk who didn’t invite her to his birthday bash, but invited her over the next day to help him clean up — and my friend almost went. After the ‘Oh, noooo!!?’s subsided, we spun it into a two-page story called ‘Temporary Love Insanity’ about other embarrassing things usually sane women have done in the name of lust.

“Where else do you get paid for having a decent social life and a keen ear for interesting stories?”

FUTURE PLANS:
“I’m getting a kick out of editing right now, and magazine life suits me well, so I’ll probably stay in the business for a few more years. My other plan is to find the energy to complete one of the two novels I’ve started, like every other twentysomething writer on the face of the earth.

[BOY SINGER] I’m really into the voice of that guy from Coldplay. When he sings that line “Look at the stars?” in “Yellow,” I about lose my motor skills.

[AUTHOR] Anne Tyler absolutely KILLS me. She can create characters like nobody’s business, and after reading eight of her books, I’m still surprised that I pick up a new one and get so wrapped up in the story that I finish it in two days.

[CUISINE] I get cravings for Japanese hibachi food. Never mind that you really only get it in restaurants like Benihana, favored by 13-year-old birthday girls.

[LEISURE ACTIVITY] Rollercoasters. Pretty far from ‘leisurely’ but I once drove 13 straight hours just to ride the best one in the country.

[WORK ACTIVITY] Taking a break from work and going down to the Conde Nast cafeteria for rice crispie treats.

[ARTIST] Sante D’Orazio, the photographer. I flip through one of his celebrity photo books about once a month. Seriously shiny happy people.

[HEROINE] Michelle Yeoh. That woman kicks ass, among other things.

[GETTING READY MUSIC] A CD called Lazy Dog, based on club night in London by the same name. Second CD, mixed by DJ Jay Hannan, track 5, Cada Vez. Puts the boogie in your bootie.