This article was originally published by Amy Spencer on Match.com’s Happen magazine 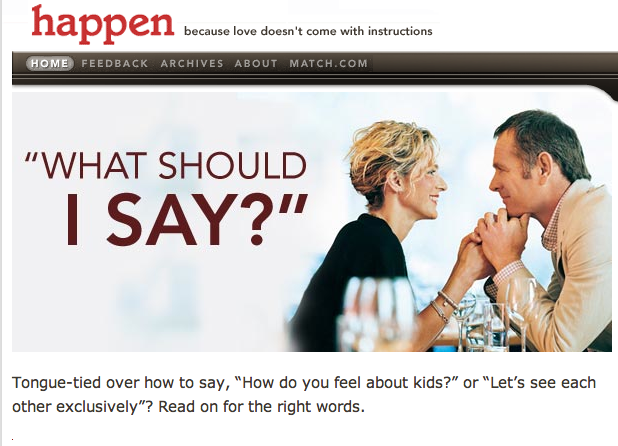 The Dater’s Conundrum: What Should I Say?

Tongue-tied over how to say, “How do you feel about kids?” or “Let’s see each other exclusively”? Read on for the right words.

By Amy Spencer
Thought asking your date out in the first place was hard? Well, the road that leads to a solid relationship is dotted with plenty more hard-to-start conversations along the way. Tackled well, they’ll bring you closer as a couple. If not, they’ll make for an awfully awkward dinner. To make sure you end up in the former vs. the latter situation, we’ve asked our communication expert Laurie Puhn, J.D., author of Instant Persuasion: How to Change Your Words to Change Your Life and founder of www.lauriepuhn.com, for some talking tips on the five toughest dating topics. Heed her advice, and you’ll never be at a loss for words when you need them most.
Tough topic #1: How to tell your date you want to be exclusive

Never, ever assume
No matter how many nights a week you cuddle up for Conan together, don’t assume you’re exclusive until you talk about it. Ideally, “wait until you’re seeing each other at least two to three times a week,” says Puhn, or when sex is on the verge of entering the picture—both are logical points to pop the exclusivity question.

Frame it as a request
People rarely respond well to demands or ultimatums, so the last thing you want to do is play hardball with lines like, “I can’t see you anymore unless we’re exclusive.” The key, says Puhn, is to present your desire in an amiable way that shows you’re open to a discussion about it. Like: “I have such a good time with you, and I want to see where this relationship will go. I think we should stop seeing other people; what do you think?”

Be prepared for either answer
If your date isn’t ready to commit, you should tell him or her that you respect that—after all, the whole idea may have caught your sweetie off-guard, and you don’t want to punish the person for not immediately going for it. But this doesn’t mean your non-exclusive status should continue indefinitely. Revisit the topic in a few months and if your honey still balks, go ahead and cut ties. Calmly say, “My feelings are strong enough that I can’t continue seeing you if this isn’t exclusive.” It’s no one’s fault, so don’t treat it as such, and you leave the door open for your sweetie to maybe start missing you and change his or her mind.

Tough topic #2: How to tell your date you want to see other people

Keep it positive
So your date wants you and only you… and you don’t feel the same way. Is there a nice way to say it? Sure, provided there’s a chance you may want to commit down the road. “What your date is really asking is, ‘Are you into this?’” explains Puhn. So if you are, say so before mentioning your reservations, as in “I’m really into this, I just need more time, can you give me that?” or “I really want to get to know you better, but it’s just too soon to commit. Can we revisit this in a few months?”

Be honest…
Now, what if your goal is to remain non-exclusive… for good? “If your answer isn’t, ‘No, for now,’ but ‘No, forever,’ putting off telling the truth means the issue will only reemerge one month later, and one month after that,” warns Puhn. So bite the bullet and say, “I like you, but I’m not at a point in my life where I want a relationship in the foreseeable future.” That may hurt, but your honesty here will spare you both a lot of pain later on.

…But not too honest
Don’t fall into the trap of answering the question, “Why, who else are you seeing?” Instead say, “I really care about you, but I don’t feel comfortable talking about that.” Honesty does not mean full disclosure—and by keeping mum, you’re making it clear that you’re not dishing info about them to any other people you may be seeing.

Tough topic #3: How to dig into your sweetie’s dating past

Don’t press for details on exes
Were his last three girlfriends blondes? Was her former live-in lover a moocher or Mr. Moneybags? Comments like “My friend got married last year—poor guy” will tell you everything you need to know about whether he wants to get hitched.

While these are legitimate curiosities, making your date dish specifics isn’t helpful and if anything, will just breed insecurity. Do yourself a favor, and don’t turn it into a competition: Your mate is dating you now, and that’s what really matters.

Instead, ask what he or she has learned from past relationships
Your goal should be to learn who your date is, what’s influenced him or her, how this person has grown emotionally over the years. To glean this wisdom, ask the larger — much larger — questions, like “What did you learn from your last relationship?” or “How did you feel when someone broke up with you for the first time?” “It’s not about the ex in particular,” says Puhn. “It’s about opening the door for the person to say, ‘Oh man, I thought it was the end of the world…’”

Tough topic #4: How to suss out if your honey wants to get married or have kids

Steer clear of direct questions
If you’re dying to get hitched or have kids, it’s understandable to want to see if this person has the same wish. But let’s face it: Asking “Do you want to get married someday?” sounds like you’re fishing for whether or not he or she wants to marry you, which could make anyone feel claustrophobic. Instead, try, “How do you envision your future—say, ten years from now?” If your honey says, “I could see slowing down my career for a few years to raise my kids,” he or she has just volunteered the very info that you’d be hard-pressed to squeeze out otherwise.

Ask about other people’s relationships
This principle is similar to the “I have a friend who’s got this problem…” conversational tactic (that is, when it’s really you who has the problem): The more objective your questions, the more likely your date will answer honestly. Ask about your sweetie’s family and about friends’ marriages. Comments like, “My friend got married last year—poor guy,” or “I love my nieces and can’t wait to have my own” say everything you need to know without setting off any serious alarm bells.

Tough topic #5: How to tell your date you’re in love

Stick to the 24-hour rule
When the feeling hits, it’s hard to hold back. But consider sleeping on it for at least a day before saying those three little words, advises Puhn. Why? Because you want to be sure you mean it, and various factors (a toe-curling kiss or one Martini too many) can cloud your judgment. The last thing you want to do is have to start backpedaling.

Don’t expect an immediate “I love you” back
When you’re ready to speak up, present it as a feeling you can’t deny, but not one you expect your date to reciprocate. “Say, ‘Look, you don’t have to say anything, but I want you to know, I think I’m falling in love with you’ or ‘I’m not sure what I’m feeling, but I think I might be falling in love with you,’” suggests Puhn. If the response is, “Thanks,” or “I feel differently,” say, “That’s OK; I wasn’t expecting to hear it back. I just wanted you to know where I stand and how I feel.” This openness frees the other person to talk to you about it if and when he or she is ready.

Amy Spencer writes for Glamour, Maxim, and Real Simple, among other publications.