For my cover story on Giada (featuring fashion photos of her, and shots with her family), you can also go straight to the source at: Giada de Laurentiis in Page Six Magazine 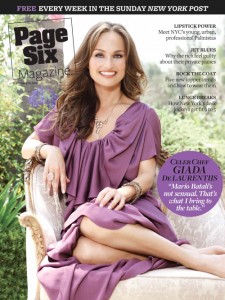 But the TV chef will at least cop to the unique brand of sensuality that made Everyday Italian, her first show, an instant hit. “Granted, I don’t wear the highest [necklines].…” Giada nods to her fan-favorite cleavage as she says this. And it’s not just her bare flesh that’s so suggestive—it’s her food, too. “The way we shot close-ups, I just wanted the food to look beautiful. I thought that’s what Americans loved about Italy—that it is so sensual and romantic. [It’s not] PBS-style cooking. Lidia Bastianich, sorry, but [she’s] kind of boring. I mean, I love Lidia, but you can fall asleep watching her. And Mario Batali? I love Mario to death…but he’s not romantic or sensual. Those are the things I bring to the table.”

Does she ever. While the Food Network recently halted production on Everyday Italian after six years (a decision she is happy with, because “It was getting a little boring”), her new show, Giada at Home, on which she’ll prepare meals for family and friends in a cozy setting, debuts October 18. Her fourth cookbook, Giada’s Kitchen, hits shelves September 30. Her other new project is daughter Jade, who was born in April and whom Giada describes as “just a peanut.”

Food and family have always been important for the 38-year-old chef. Giada’s grandfather, film producer Dino De Laurentiis, commandeered movies like Federico Fellini’s La Strada, Barbarella and the 1976 King Kong remake. From the 1940s until the ’70s, he produced 150 films from Rome, where Giada spent her early years. (Giada and her three younger siblings took their mom’s maiden name after their parents divorced.) She remembers cooking with Dino and says he planted the seed that cooking was a good way to spend a life. “We kids would hang out in the kitchen. [Dino] would have plates of salami and parmesan cheese, and we would break pieces off and eat while he prepared dinner.” Or he would create Italian desserts like tiramisu, and “I would help dip the cookies in espresso,” says Giada, adding “I think that’s where the [cooking] spark came from early on.”

Culinary fire duly lit, Giada’s family moved to be with Dino in New York when she was 8, to an apartment overlooking Central Park, but it wasn’t exactly an Italian version of Eloise at the Plaza. “I went to school [in Manhattan] and it was awful because I didn’t speak English,” Giada says, but she has much happier memories of “Central Park and ice-skating in winter” as well as her favorite NYC indulgence, street-cart pretzels. “I don’t know if it’s because they’re sitting next to hot dogs and roasted chestnuts and the smokiness is soaking in, but there’s one cart on 55th and Fifth that has the best freaking pretzels.”

A year after the Big Apple, the family followed Dino again, in 1979, to Beverly Hills. That transition did not go any easier, and Giada remembers being teased for her name. “I was very different,” she says. “All I ever wanted was to [have a name like] Mary. These days it’s cool to be ethnic and to be different, but when I was a kid, it was not cool—at all.” Her family’s culinary prowess didn’t help things. “My friends would come over [for dinner] and my mom would make crepes with eggs, stuffed with mozzarella cheese, tomatoes and spinach. And they’d be like, ‘What is this?'” It was an experience she’d relive years later with her husband, Todd Thompson, to whom she’s been married for five years. “In the beginning he’d look at me and go, ‘Is that eggs? Why am I having eggs for dinner?'”

In 1996, after getting her undergraduate degree in social anthropology from UCLA, Giada took her family traditions to culinary school at Le Cordon Bleu in Paris. Two years later she returned to California to work in the kitchens of the Ritz Carlton in Marina del Rey and Wolfgang Puck’s Spago restaurant in Beverly Hills, and then as a caterer, food stylist and private chef—appropriately for her background, her first client was director Ron Howard.

She insists, though, that she never wanted any part of Hollywood, and is, in fact, shy, despite her open, smiling way on TV. “It’s funny—my husband will be like, ‘You’re so loud on set, and then you get into public and you’re just this little mouse.’ I’m actually a very shy person, which is why I always chose to be in the kitchen. You can make people happy and entertain them, without really being there,” she says, laughing. “You can make a very short appearance [in the dining room] and then say, ‘I’ve got something on the stove, gotta go!’ ”

That defense mechanism was tested when, in 2001, Giada and her family were featured in Food & Wine magazine. A Food Network executive called soon after, saying he’d seen the article and wanted Giada to make a demo tape. She turned down the offer immediately. “My whole family is in the movie business,” she says (in addition to Dino, her aunt is also a producer and her late grandmother was an actress in Europe). “If I wanted to be in front of the camera, I had opportunities to do that.” Still, the TV exec pushed until sherelented. Wanting to keep things casual, she had her brother film her “making my mother’s pasta with béchamel sauce. And that’s how Everyday Italian was born.”

And while that life-changing adventure is over, her relationship with husband Todd, a fashion designer for Anthropologie, is going strong. They met through mutual friends in 1990. She was 19, and he was 27 and a budding womenswear designer. As a result, Giada claims to have helped launch the slip dress trend that dominated the ’90s. “I was looking for slip dresses and couldn’t find any. Betsey Johnson was the only one making

them. I said to Todd, ‘Slip dresses are going to be huge.’ So he started making them and sold them to Anthropologie, and it’s been 12 years now [that he’s been working there].” Thirteen years after they met, the couple finally tied the knot in 2003. Why wait so long? “I never cared about marriage. I was more worried about working and really didn’t think I’d have kids,” she says. “Then Todd turned 40 and I guess he thought to himself, ‘I think I’d like to marry Giada.’ ” (Wisely, he chose the nostalgic route to her heart, proposing in Central Park over her beloved pretzels.) And just as Giada changed her mind about marriage, she also shed her notions on motherhood.

Hoping to instill an appreciation for her home country in her child (Giada means “jade” in Italian), the chef sings Jade the Italian lullabies her mother crooned to her. And her husband has plans to mix his own family traditions into the pot. Giada rolls her eyes and laughs. “He will always tell the story of how his grandmother would take him to McDonald’s and Burger King. And he says, ‘I can’t wait to take Jade.'”

Even so, Jade seems bound to pick up her mom’s passion for homemade food. Because no matter what people think, Giada’s going to continue to show off the sensual side of it. “I want the food to look beautiful, [for the viewer] to get really close to that beet and see the salt and the herbs that have been chopped into it,” she says. “It is a bit…pornographic.” Still, this Italian has nothing on the Brits. “I remember watching Nigella [Lawson] before I had a show, and she put an asparagus in her mouth, and, I mean, the way she sucked on that asparagus, I thought…who does that?”