My cover interview with Alicia Silverstone is out this month in the September issue of Health magazine. 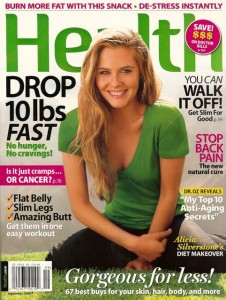 She was a pure joy to talk to, happy about her life, her marriage, and her new book, The Kind Diet, which has obviously been kind to her.

One of the fun parts of the interview—when Alicia explained that she likes to garden naked and earned an affinity for her birthday suit from fellow actor Woody Harrelson—got picked up by a number of media outlets, including Us Weekly, who did a roundup of celebrities who like to be naked, and the New York Post, in their Page Six story “Garden Heat Between Harrelson, Silverstone.” Well, that’s pushing it some. The pair actually filmed the 2002 movie Scorched together and have spent time together with their families (including Woody’s wife and kids), as Alicia explained.

But it’s all in good fun, and will hopefully bring a little more attention to the fact that Alicia looks so dang good on her diet, she should garden naked!